The Inverness Courier has been speaking to representatives from Nairn River, West and Suburban Councils on the issue of a single Community Council for the town.
Briefly the West and the Suburban want to see a single council for the town too with only the River against. Actually the River discussed the issue again tonight in the Laing Hall on Tuesday night and it seems that since a new Council has been reelected they will debate the issue again. Iain Fairweather was present and asked if the River Community Council was obliged to undertake consulation with the public on the matter. Hopefully they will!
Here's what John Mackie told the Inverness Courier:
"This consultation is not about John Mackie, Jean Tolmie or any of the other community councillors," he stressed. " It is about the folk of Nairn and what they want."
"We have been arguing for a single community council for a number of years because at the moment there are three different voices for the town and on some issues, like the A96, we are not singing from the same hymn sheet."
Posted by Graisg at 21:47 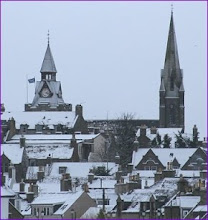